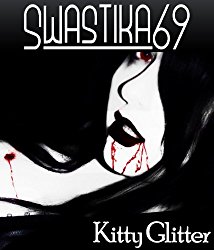 A Review by Karl Wenclas

There are many kinds of pop writing, among them Noir Pop, Fun Pop, Romantic Pop, Trash Pop, Speed Pop, and Beat Pop. There’s also Extreme Pop (a variation of Trash Pop) of which the master is a mysterious individual named Kitty Glitter who’s been making waves across the internet. (See this interview at Jezebel magazine.) Obtaining fans but also receiving some of the worst (and best) ratings and most outraged reader comments ever seen at Amazon.

Is this person on to something? Satirizing American pop culture icons from Katy Perry to Star Trek– yet at the same time celebrating them. Everything about the Kitty Glitter oeuvre catches the pop culture vibe. Each of us could present our own examples to celebrate. To me, the essence of pop culture is Joan Jett and The Runaways singing “Cherry Bomb.” Kitty Glitter is out to capture that essence.

The show is outrageous. The breaking of all bounds, tastes, identities, trademarks, copyrights– pushing the limits of speech– so all that’s left is a love of cheezy pop culture. The public’s love of it.

I’ve read a draft version of Kitty’s upcoming e-book novel The Wet Clits, which may have already been released. The Kitty Glitter books are being produced fast and furiously, perhaps to feed the burgeoning public demand for them.
***

His name was Pussy Burner and he rolled up onto the scene on a motorcycle that was burning fuel like it was Hell.

Clitney was the first to notice him. She noticed his hot body and giant muscles. She noticed the Judge Dredd helmet he wore that covered the top part of his face, a helmet with an insignia that looked like a twat with a swastika cut into it.

***
There’s a line between outrageousness and offensiveness. Does Kitty Glitter cross it?
***

“Arr!” Monster of Frankenstein said, “I am the most famous story ever, but to be real, monster is your friend. Please take care of yourself and start making music again.”

“Whatevs,” Clitney said, “I can’t make music without a band.”

“Use four track!” Monster of Frankenstein said as he used his giant green fists to smash Clitney’s TV to pieces.

“I’m not scared of you,” Green Kitty said as he pulled out a switchblade, “I’m gonna cut your butt off for what you did to my sister.”

***
We at New Pop Lit believe, Elon Musk style, in breaking down literature into its constituent parts and putting them back together in a new way. Kitty Glitter has some of the Pop elements down– simplicity; superficiality; humor; cliche’. But the Glitzter also makes aesthetic mistakes. More plot hooks, more consistent and defined characters might correct them.

Then again, critiquing the writing is beside the point.

The writing has flair. Amid the omnipresent obscenity, Pop flair. In a crude sense, even style.

Wayward experiment or glimpse at the literary future?